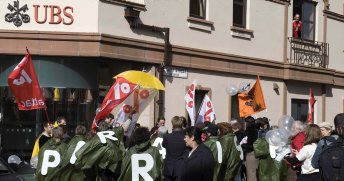 UBS receive a visit from the protesters

At some points, the press pack in pursuit outnumbered them by about two to one as the 30 or so protesters made their way slowly from La Frégate café on the waterfront to the Royal Square. Along the way they stopped outside the Jersey branches of a number of international banks as they attempted to highlight their arguments that the major economies should act to close down tax havens.

Among the banks targeted were French institution Société General on the Esplanade, Irish bank AIB in Castle Street, Swiss banking giant UBS in Union Street, German bank Deutsche in St Paul’s Gate and Royal Bank of Scotland International in Bath Street. Outside each bank, a question and answer session was held and speakers made claims about the role played by the particular banking organisation in the global financial system.

Of the 30 or so protesters, 20 arrived yesterday morning on the ferry from France. They wore green tarpaulins and had letters stitched on the back to make up the words ‘Paradis Fiscal’ when they stood together.

There were only a handful of Islanders present, including unsuccessful election candidate Nick Le Cornu, who stood on a Time4Change ticket, and local Attac representative Rose Pestana. However, she did not go on the walk around town.

Voir en ligne : This is Jersey