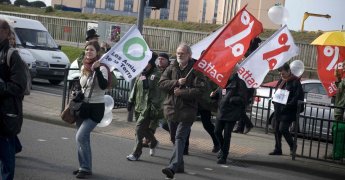 Protesters march from the Waterfront this morning

PROTESTERS campaigning to have tax havens closed down targeted banks in St Helier this morning.

Campaigners from a variety of charities and non-governmental organisations from across Europe were this morning due to walk from the Waterfront to hold a demonstration in the Royal Square and later to the doorsteps of banks themselves.

Yesterday banks warned staff to use public entrances in case they were targeted as the protesters rallied against ten UK and European banks. Last night the protest groups held a public meeting at St Paul’s Centre attended by about 100 people.

The protests were timed to coincide with tomorrow’s talks by finance ministers from the G20 group of leading economies being held in London. The ministers are expected to discuss the regulation of offshore finance jurisdictions.

A host of media from a number of countries are in Jersey to cover the events. The primary organiser was the charity War on Want and it brought together groups from Italy, France, Ireland and Belgium to target Jersey’s finance industry.

Christian Aid representatives from the UK were part of the group but the local Christian Aid group refused to support the protest and expressed dismay that its participation could damage local fund-raising efforts.

Voir en ligne : This is Jersey