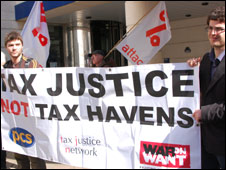 Staff at a Jersey bank have cancelled fundraising events for Comic Relief over safety fears because of a protest against tax havens.

A number of UK charities, including War on Want, said tax havens were depriving developing countries of £250bn a year through tax avoidance.

Lloyds Bank said because of safety concerns it has cancelled fundraising events in its St Helier branch.

Jersey Finance said it had nothing to hide on its tax arrangements.

Staff at the other Lloyds branches in Jersey will still be helping to raise money for the charity.

On Tuesday, Jersey and the UK signed the Tax Information Exchange Agreement (TIEA) which is aimed at cracking down on tax evasion.

But War on Want said that was not enough and had been used to deflect attention away from Jersey before the summit in April of the G20 group, an economic forum consisting of 19 of the world’s largest economies, plus the European Union.

"Yet the UK plays a major role in helping companies dodge the tax they owe which could help the poor."

Jersey Finance, which promotes the island’s finance industry, said : "Jersey is a well-regulated jurisdiction, recognised by the Organisation for Economic Co-operation and Development (OECD).

"We are happy to talk to people about what we are doing."

Prime Minister Gordon Brown has called for action on tax havens while US President Barack Obama’s administration has endorsed legislation to crack down on offshore tax havens.

The OECD has a blacklist of countries that will not fully co-operate in tax evasion probes and includes Andorra, Monaco and Liechtenstein in Europe.